A CIA interrogation manual from the mid-1960s admitted that ‘regression’ in the psychic sense is the aim of interrogation.

The anonymous author wrote that it was necessary to ‘obliterate the familiar and replace it with the weird’.

He called it ‘the Alice in Wonderland or confusion technique’, and the object was ‘to confound the expectations and conditioned reactions of the interrogatee. He is accustomed to a world that makes some sense, at least to him: a world of continuity and logic, a predictable world’ [1].

Under extreme stress we can lose touch with what is familiar, logical and predictable, and experience confusion and loss of control.

Andrew experienced feelings of panic in the courtroom.

His confidence was undermined and he began to feel, without any rational justification, that he was not up to the task in hand.

It was as if his high expectations of himself had assumed an exaggerated and oppressively demanding nature.

He had a vague sense that his thinking was unrealistic, yet was unable to rein in the anxiety.

Many people have written of the demanding nature of an inner critical voice.

Sigmund Freud speculated about a three-part personality: the ego, superego and id (literally, ‘I’, ‘Over-I’, and ‘It)’.

For Freud the superego represented an ethical component of personality providing the individual with moral standards, inherited in the main from parental figures.

Often the inner parent could be harsh and punitive: ‘one part of the ego (the superego) sets itself against the other (the ego, or conscious self), judges it critically, and, as it were takes it as its object’ [2].

It was as if his thinking had gone off-line, switched off by anxiety.

Psychiatrist David Malan proposed a simple model of the workings of anxiety and how we instinctively try to manage it.

His model of a ‘triangle of conflict’ consists of defence (D), anxiety (A), and hidden feeling (HF).

Anxieties are experienced in the context of human relationships. 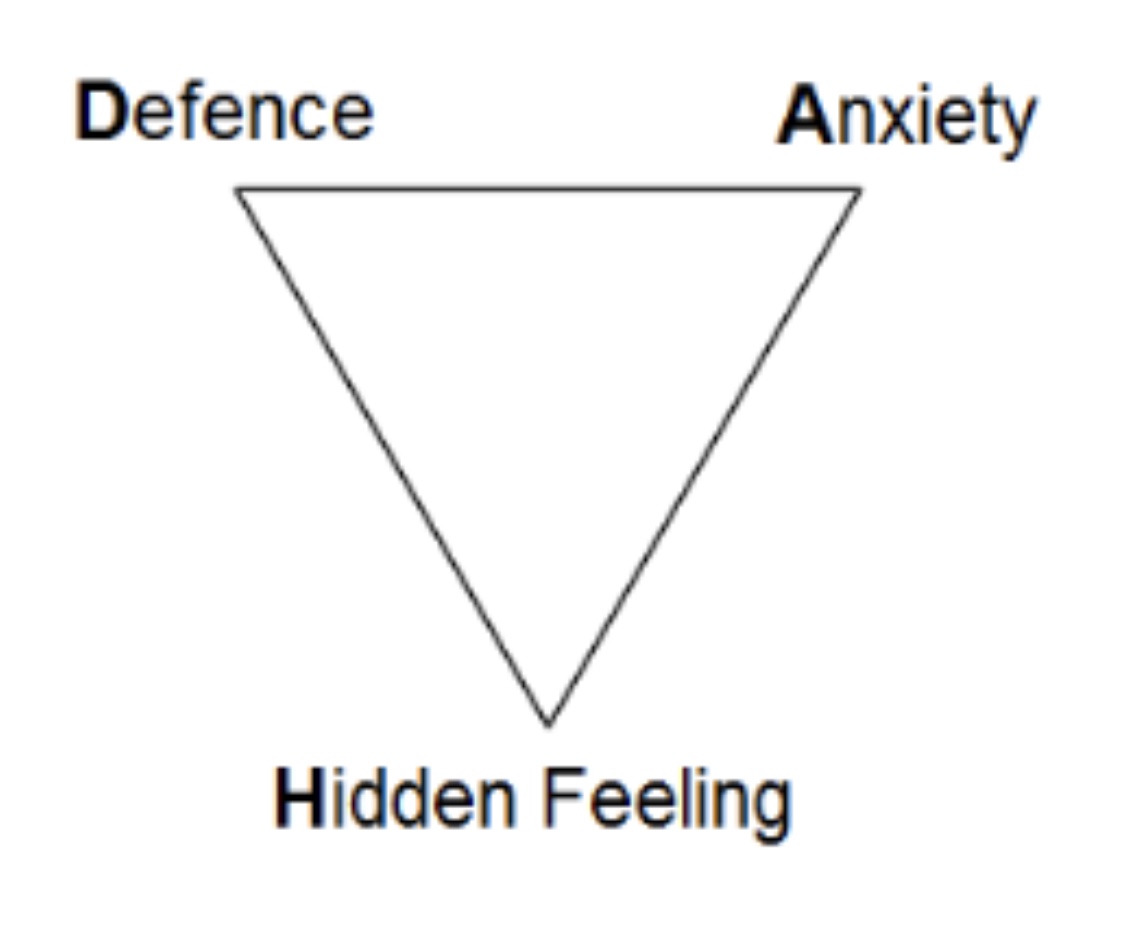 The triangle stands on one apex (hidden feeling), representing the fact that the aim of most dynamic psychotherapy is to reach, beneath the defence and the anxiety to the hidden feeling, and then to trace this feeling back from the present to its origins in the past.

Often this relates to parents or parental figures [3].

A simple analysis of the triangle in Andrew’s situation might be that he was experiencing anxiety from fear of failure, financial loss, loss of reputation and personal humiliation.

This might have been in the context of professional rivalry or comparisons that he drew between himself and others in his chambers.

He would largely have been unaware of these hidden feelings.

He attempted to defend himself against the anxiety by repression and denial (trying to ignore the physical discomfort that his anxiety was causing him), intellectualisation (trying to think his way through the difficulty), and alexithymia (an inability to read the emotions that he was experiencing).

All of these ‘defensive mechanisms’ or ‘coping strategies’ were maladaptive.

He was using them at the expense of his true health.

Had he been able to think more clearly and objectively and acknowledge what he was experiencing, he could have used more adaptive and realistic ways of coping.

The thinking part of his brain, principally the prefrontal cortex, would have been integrated and activated and he would have been able to obtain a more effective position of self-observation and consequently performance.