THE HIGH ROAD, THE LOW ROAD AND THE BEARS

Joseph LeDoux, Professor of Science at New York University, has written extensively on the phenomena of emotion and its function in the brain.

He summarises the complex neural interactions that we experience in anxiety: 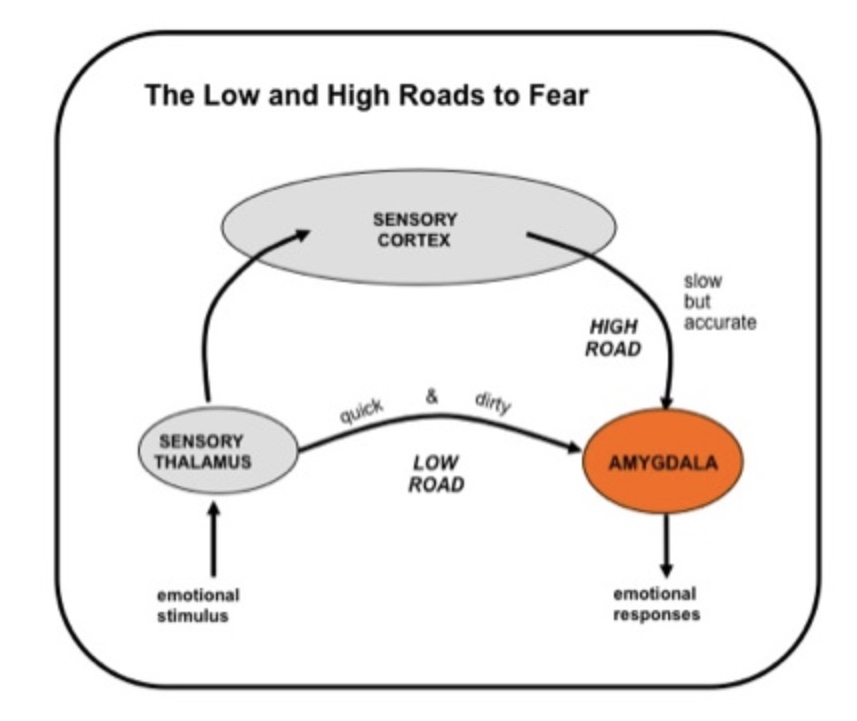 However, because the direct pathway bypasses the cortex, it is unable to benefit from cortical processing.

As a result it can only provide the amygdala with a crude representation of the stimulus.

It’s what he terms a ‘quick and dirty’ processing pathway.

The direct pathway allows us to begin to respond to potentially dangerous stimuli before we fully know what the stimulus is.

This can be very useful in dangerous situations.

However, its utility requires that the cortical pathway be able to override to the direct pathway.

It’s possible that the direct pathway is responsible for the control of emotional responses that we don’t understand.

This may occur in all of us some of the time, but it may be a predominant mode of functioning in individuals with certain emotional disorders [1].

Some time ago I was walking with friends in open ground above the tree line in the Canadian Rockies.

Two of us were walking ahead of the others and we heard squeaking alarm calls from ground squirrels.

We thought little of this and carried on walking.

We stopped abruptly when we heard a shout from behind.

About 50 yards ahead of us crossing the path were a mother grizzly with two cubs.

We had not seen them because from our viewpoint they were just below a ridge.

And if we had tried to retreat we could quickly have been outrun.

Thankfully we were just far enough from the animals not to represent a threat to the cubs and they just lumbered across the path and up the mountainside.

My thalamus received auditory and visual stimuli which were shunted to the amygdala and the visual and auditory cortices.

The hugely simplified unseen neuro picture was something like this:

My amygdala registered a danger.

It then triggered a fast physical reaction, to freeze.

And when we saw the animals on the path a clear image was sent to my conscious brain for a considered response.

The neural responses went from the sensory thalamus to the amygdala and on the ‘quick and dirty’ route.

As a result we stopped walking.

Contemporaneously, as my friend and I assessed the situation in a split second, we were able to process what was going on, consider our options and make a decision.

We were probably also helped by having one another to regulate our thinking.

The stimulus also went from the sensory thalamus via the sensory cortex to the amygdala for processing an appropriate response.

We were able to use a system of ‘functional’ alarm.

In contrast, Andrew, with his uncomfortable experience in court, was experiencing a ‘false’ alarm.

Because of his earlier difficulties, generalised anxiety when younger, and a recent mishap in court which he had experienced as devastating, levels of anxiety arose to such an extent that in court, as he was listening to his opponent’s arguments and cross-examination, the stimulus took the ‘low road’ and his thinking went off-line.

In other words, he was unable to think about his thinking.

He was unable to mentalize.

In his words, his mind was ‘scrambled’.

Jon Allen of the Menninger Clinic puts it like this: “Stress is the enemy of mentalization; when anxiety reaches a certain level the mentalizing brain goes offline and moves into survival-mode” [2].

I’m not going to go into detail about the subtleties and complexities of neurology.

But the simple outline above demonstrates brain’s response to stress and its method of processing.

Emotions are complex processes that happen to us.